Scania uses cookies on our websites in order to ensure the performance and user experience. If you continue to browse without changing your web browser cookie settings, you are agreeing to our use of cookies. Find out more by reading our cookie guidelines in the footer link.

You seem to be located in .
Go to your Scania market site for more information.
Stay on the New Zealand site

Time can make or break your business

Time for a new generation

Whether the assignment is long haulage transport or constructing a giant clock made up of Scania's new generation of trucks and services, high performance and precision are required. And it's the drivers who get both the wheels and the hands of the clock dial to spin.

With 125 years of experience, Scania knows the value of time – and that being punctual can make or break a customers' business. To prove this, Scania took on the most demanding challenge there is – time itself. A challenge where 14 trucks and 90 professional drivers literally had to keep track of every second.

At a deserted airfield in the middle of nowhere, Scania set out to build a gigantic clock, entirely made out of trucks with highly skilled drivers. 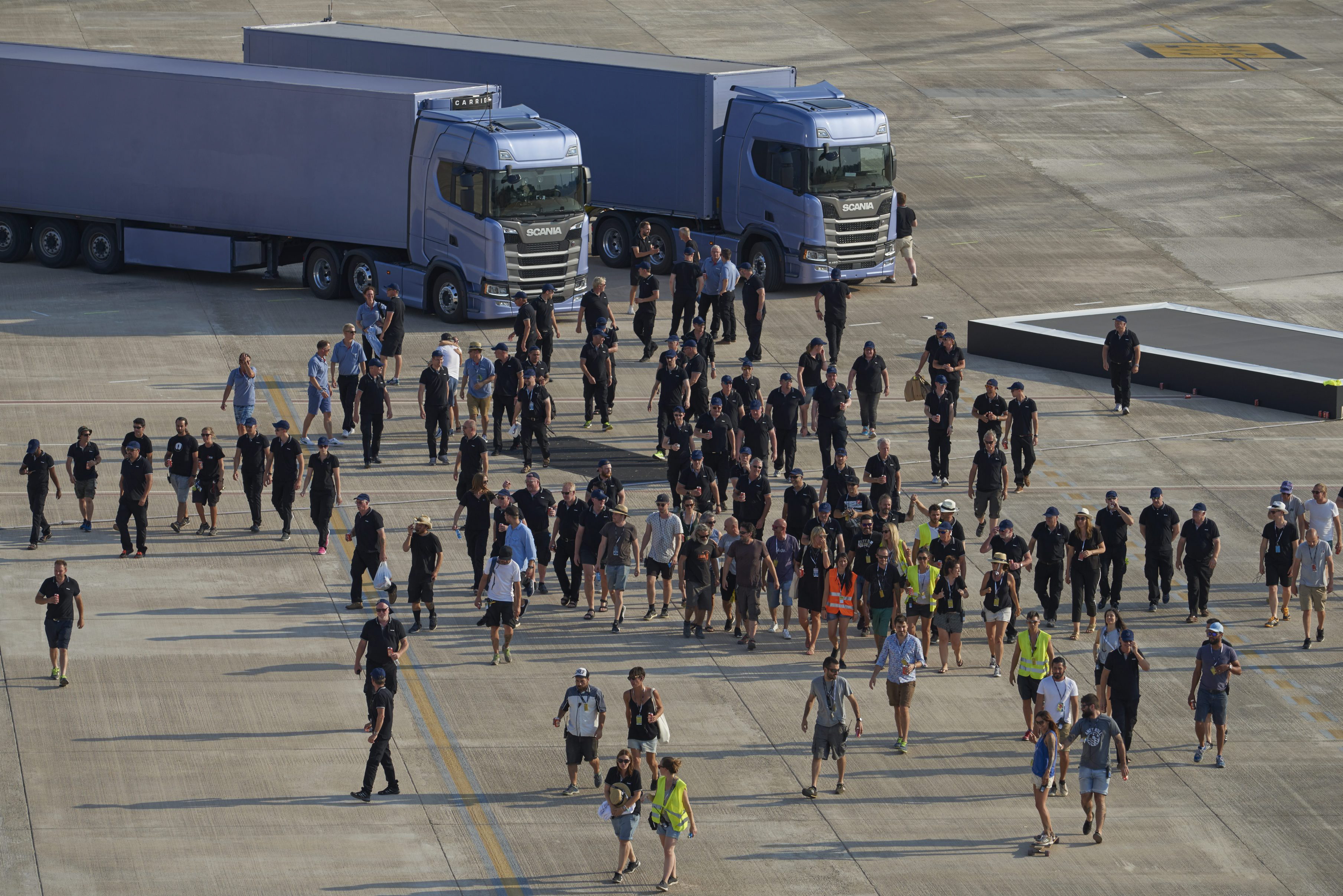 The final clock took up 70,000 square meters and was over a kilometre in circumference with 17 metres between every second and minute mark and 85 metres between each hour. The outer vehicle in the second hand had to maintain a constant speed of just below 60 km/h, driving 1,440 kilometres over the course of 24 hours. Meanwhile the innermost trucks of the minute and hour hands were creeping less than 100 meters altogether.

It’s a well-known fact that the driver is one of the most important factors in the fuel economy equation, as well as for maintaining the uptime of the vehicle. Scania knows how to develop driver skills. No matter how experienced a driver is, it’s still possible to increase awareness of safety, wear and tear and environmental impact with Scania Driver Training and Coaching. And with the new flexible maintenance plans all vehicles are maintained exactly right based on just that specific driving conditions.

Before recording, the 90 drivers trained for several days in order to learn how to accelerate and decelerate at the precise pace, always with their attention directed towards the left. The outer truck in each hand set the pace.

“We had to keep a constant eye on the exact time and be at a particular mark within a second, again and again… It's an extreme strain to drive like this. After two hours behind the wheel you're exhausted. And then we switched drivers on the fly,” Elin Engström, one of the drivers, says.

The vehicles in the minute hand had to move every sixty seconds in simultaneous acceleration and make a distinct stop at a mark on the concrete tarmac. The two drivers in each truck were replaced every six hours.

“Each crew had their packed lunches on board. Even though it was 40 degrees C, it was important to hold back on fluid intake to make the entire session without interruption,” says Per-Erik Nordström, another one of the endurance drivers.

The brain of the whole operation was the Scania Fleet Care service, utilising connected tools – such as Scania Fleet Management. From the control tower, Scania's Fleet Managers could keep track of all the parts and constantly monitor every vehicle's and drivers' status. The data enabled us to always stay one step ahead and foresee any problem that could arise.

The story behind Scania's clock film

“When the idea came up to create a fully functional clock built of trucks and filming this for 24 hours, the first thought was that this is a brilliant idea –  that can go wrong in a thousand ways. The brilliance of the idea is that we in a playful way get the message out, about time and uptime as key factors in long-haulage, and in a spectacular and innovative way present the new Scania’s total offering.” Explains Karin Hallin, Marketing Communication Project Manager and one of the project leaders for the clock film.

The practical problems and complexity of the project grew with time: from finding a shielded but large enough place somewhere in Europe, with the right support, to the right infrastructure to speed calculations, driver changes and tire wear.

“With local staff, drivers and Scania staff we were approximately 250 people on location for a whole week. It was a massive logistics exercise in 40 degrees heat. Then the attitude and personality of all involved becomes extremely important." Karin says.

“I think it was that positive spirit and great cooperation of everyone involved that made it possible to create this perfectly synchronised ballet of trucks for 24 hours.”