Two years after winning the Scania Young European Truck Driver Competition, Gabriel Warde hopes to start his own small trucking company along with his brothers – and maybe one day his sons.

“Right now it’s mostly a dream,” says Warde. “Competition is fierce and the margins are small here in Ireland. But you have to have dreams don’t you!”

Warde is at the 2014 Scania Young European Truck Driver Competition Irish final in Strokestown. He is too old to take part in the competition now, but has many experiences to share with the new finalists, one of whom will bring the Irish colours to the next European Final and perhaps be crowned as the new European Champion.

Warde begins race day by demonstrating how an old master drives with the 15 finalists following his every move. 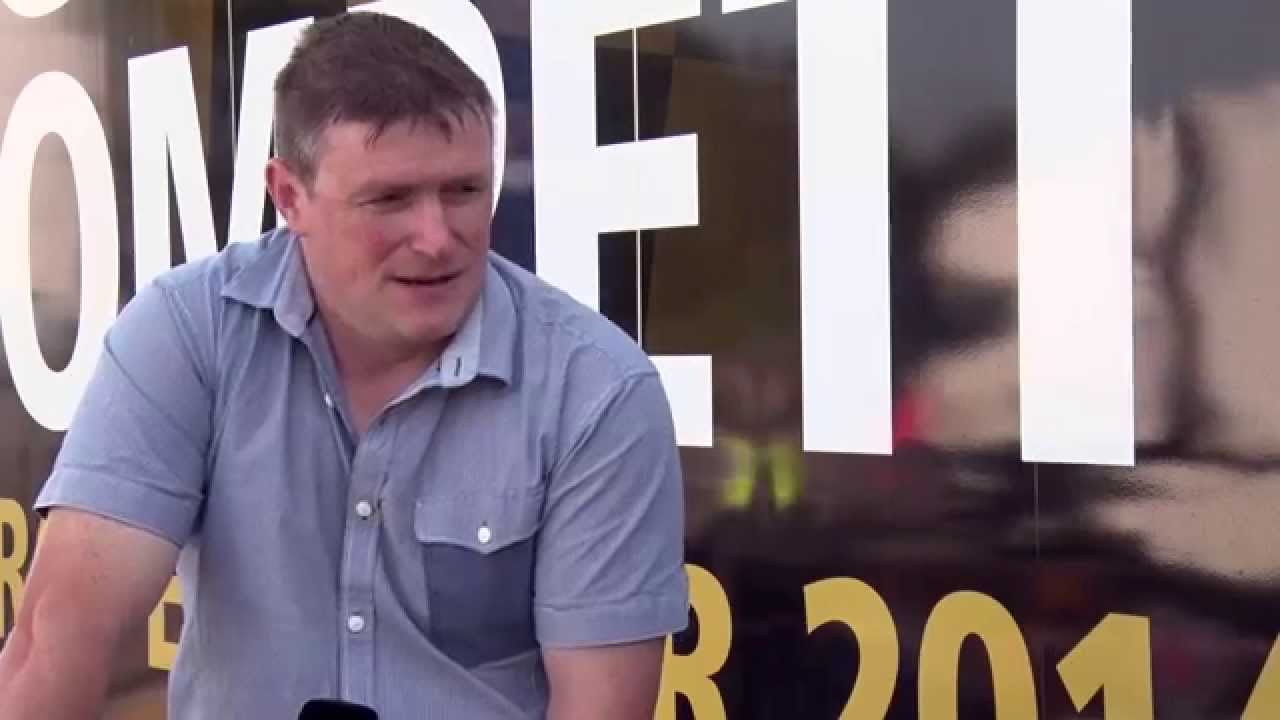 “Good to be back”

With son Darren on his shoulders Gabriel Warde enjoyed the Irish final and revived some good memories from the latest European final of YETD 2012.

“Thank god that he is too old to compete this year,” one of them says shaking his head at Warde’s fast and faultless driving display.

Throughout the day, colleagues and former participants in the contest come up to Warde to talk about the European final two years ago when Warde lifted the winning trophy in front of 10,000 spectators. Some want to discuss and analyse the final dramatic moments that resulted in Warde winning a new Scania truck worth EUR 100,000.

“It feels good to be back at the Irish finals and see the new contestants experience the same things I did two years ago,” says Warde. “It gets nerve-wracking when it’s time for the final. The demands and pressure are a lot tougher than you expect. One miss and you lose a point and it is all over. You do not have much room for error in the final.”

Victory in 2012 resulted in many changes for Warde, although much is still the same.

“I still drive the trucks I have always driven. It is clear that many people recognise me today and know that I won these competitions and that’s nice.

“Another difference from before is that I’m more safety conscious. I’m probably a better driver today and use less fuel than before. Reducing fuel consumption is becoming more and more important for us professional drivers. And we really need to drive better. I know this from personal experience!”

Two years ago, Warde delivered milk on the Irish west coast. Today, he works for Lynx Transport & Logistics in Galway.

After his victory continue to develop his driving it became a natural thing for Warde to. Ongoing driver training is important to the transportation industry, he thinks.

“I am also responsible for making sure that loading and unloading is done safely so that none of the cargo gets damaged,” he says.

“I learned a lot during this time,” he says. “I have become more reliable and drive more economically. And I try to practise these aspects every day when I drive.”

After his victory, it became a natural thing for Warde to continue to develop his driving. Ongoing driver training is important to the transportation industry, he thinks.

“Daily Driver Training covers so much,” he says,” from the control of the vehicle to saving fuel.”

He has also seen how the profession of a truck driver has changed in recent years.

“The demands have increased quite a lot in recent years,” he says. “The requirement for the cargo to be delivered safely and on time is always increasing. And with increased responsibility and all the permits we now need, it has become more difficult to become a professional driver.”

Of course, the reigning European champion has some advice for his Irish colleagues who are competing for a place at the next European final.

“The challenges at the final today are basically the same challenges that you face every day on the road,” he says. “And for those who do not win today, you should continue to practice and train every day. This will definitely make you better at your profession and who knows, in two years you might be able to come back and try again to become champion!”

And regarding his dream, Warde thinks victory may be coming a little closer.

“My father once had a small transport company and my brothers are also truckers. Our children also seem interested. So trucking really is in the family!”