Scania has further refined the airflow around the front and along the sides of the G- and R-series cabs to lower drag and cut fuel consumption. In addition, a redesigned sunvisor with improved airflow and a new set of optional auxiliary lamps is introduced on all cabs. A new range of premium seats and revised interior colours enhance comfort and well-being for drivers and passengers.

Scania’s aerodynamics specialists took a close look at all imaginable areas for further productivity and fuel consumption improvements. Despite the fact that the Scania G- and R-series are two of the most aerodynamic truck ranges in the market, they identified areas where air drag could be significantly reduced.

The modifications involve smoothing the cab corners to pass the airflow onto the cab sides with minimum resistance. However, some turbulence is needed to keep dirt and spray off the door handle. The solution is a patented deflector lip just above the headlights. The lip includes a duct that generates the right amount of swirl. 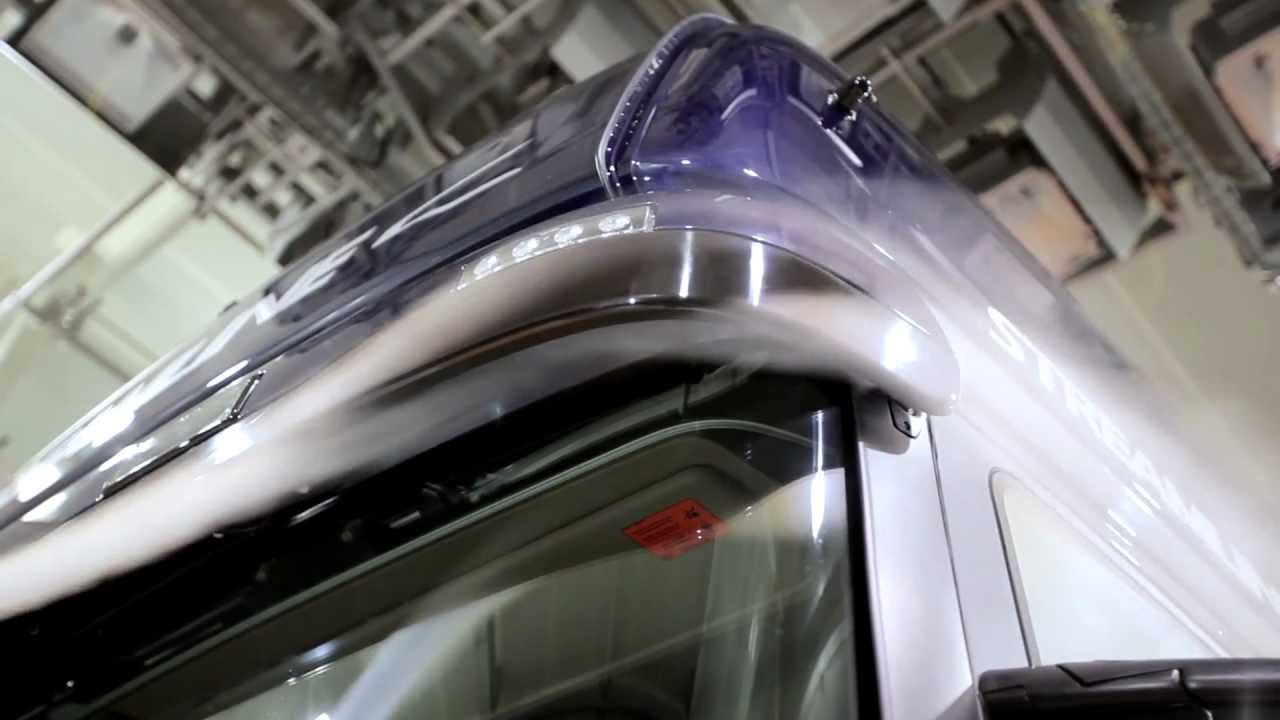 Scania’s styling team rose to the challenge and gave the cab a fresh, modern look that blends in with the basic shape of the cab. The deflector lip is adapted to the different heights of the G- and R-series cabs. On V8 trucks, the lip features a chromium insert to complement the other V8 styling accents.

The air enters above the light unit and is forced to swirl to create an anti-spray barrier.

The new sunvisor also refines the airflow and sharpens the look. All attachments have received attention, as well as the integrated spotlights and LED marker lights.

The new spotlights are not just stylish – they also feature an improved, more relaxing beam pattern, both close to the truck and at a distance. The ends of the sunvisor have been opened up to allow air to escape along the sides of the cab, a revision that also serves to reduce wind noise.

The new aerodynamic corner treatment and sunvisor reduce fuel consumption at cruising speed by up to one percent on the Scania G- and R-series. These styling changes are not incorporated on the Scania P-series, since the aerodynamic gains are negligible in this lower-mounted cab range.

Other styling changes at the front include new headlight units, with new bezels, LED indicators and daytime running lights. Light options include H4, H7 and Xenon, with H7 as standard on G- and R-series in Europe.

New unique LED taillights are also being introduced, shaped to mimic the Scania styling traits at the front and providing an extra fuel saving of 30 litres per year, as well as a long service life and higher reliability.

Scania Streamline is the name of G- and R-series tractors and rigids fitted with a full air deflector package ex-factory. The following items are included in the standard specification for the European market:

A new version of Scania Ecocruise is fitted in markets where no topographical map data are available. The system is integrated in the economy mode of Scania Opticruise.