Information from these devices is relayed to a central processing unit. Here it’s analysed, along with data from sources such as the engine control system and speedometer, as well vehicle data such as windscreen wiper activity.

The system is able to distinguish between the fixed and moving obstacles in a vehicle’s path. It is designed to avoid producing false alarms, as these can frustrate drivers and lead to unnecessary braking –something that increases the risk of an accident. A comprehensive testing program and sophisticated engineering mean the system is able to rapidly and intelligently process inputs, allowing it to make the necessary judgements at motorway speeds. 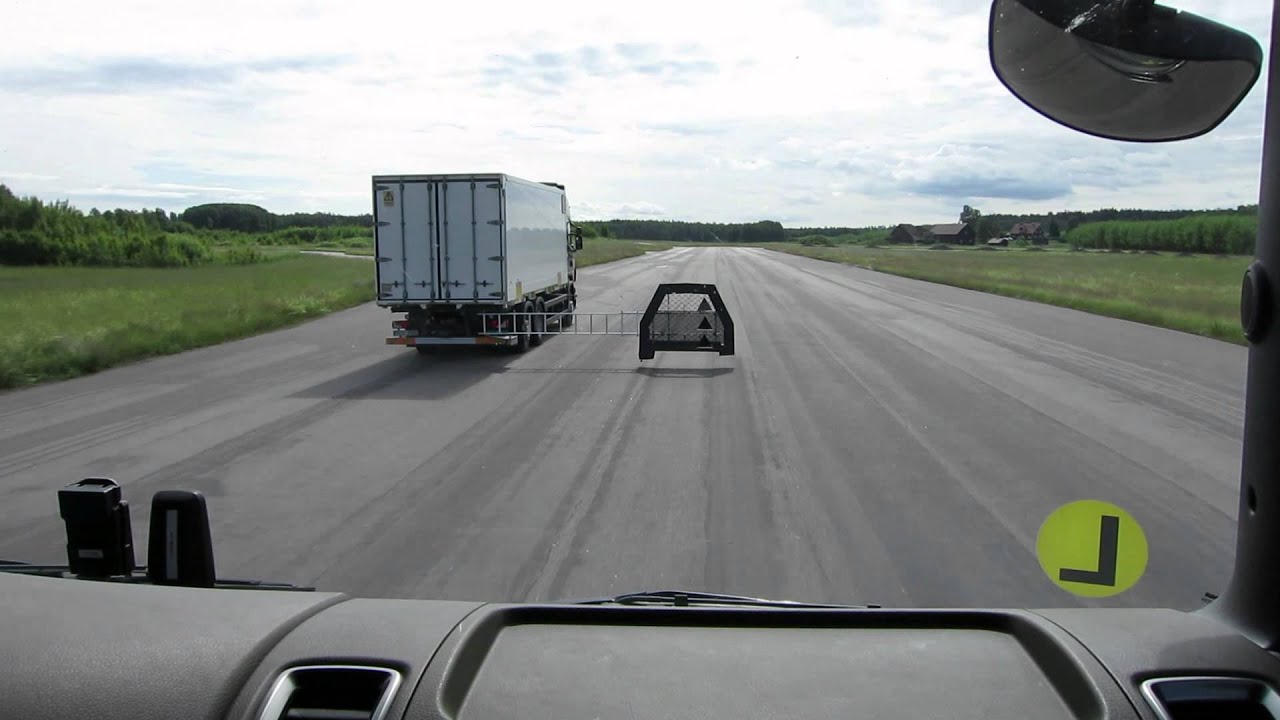 How the system works

Scania’s AEB system uses front-mounted, multi-antenna radar technology with no moving parts to measure the distance and relative speed of any obstacle. Meanwhile, a camera mounted behind the windscreen determines how wide each obstacle is, its lateral position and its nature.

In situations where a truck’s speed exceeds 14 km/h and an obstruction is perceived in its path, the system assesses whether the driver is in control. It does this by examining whether the brake or accelerator is activated. A typical situation where this might happen is when a truck approaches a car which is indicating a right turn just before a motorway exit.

If the system detects an obstacle in the truck’s path and senses the driver is not reacting, it activates an audible collision-warning signal and a sends a message to the driver’s display informing the driver of the high risk of collision. Additionally, a special brake-assist system is activated which increases brake-pedal sensitivity, potentially helping the driver to avoid a collision.

If, following these prompts, there is no sign that the driver has reacted to the situation, the system enters the next stage of alert. It sends an even clearer signal to the driver by applying the service brake and illuminating the brake lights. This action utilises only part of the vehicle’s total braking capacity and its primary purpose is to attract the driver’s attention. The system undertakes such action when the distance to the obstacle has roughly halved since the original collision warning sounded.

If there is still no reaction from the driver, and the AEB system judges a threshold pertaining to relative speed and distance to the obstacle has been exceeded, it commences emergency braking. Although a collision may be inevitable, the system continues to slow the truck to relieve the force of the impact. This also reduces the risk of the truck pushing the obstacle into the vehicle in front.

De­celeration capacity is dependent on factors such as road surface conditions and tire wear.

Responsibility always rests with the driver

While Scania’s AEB system is based around the latest technology, it’s crucial that drivers are still able to use their own judgement and take control of the vehicle as required. Drivers can ignore warnings about imminent collisions with either stationary or moving objects for three seconds by depressing the accelerator to kickdown mode. This is useful, for example, when overtaking. The driver can also stand down collision warnings by activating the brakes or using the turn signals, actions which the AEB system recognises as showing the driver is in control.

No AEB system can completely eliminate the chance of a rear-end collision, for example, in situations such as a sudden traffic jam. AEB systems simply cannot completely anticipate the intentions of the driver and the surrounding traffic. Even the most sophisticated support system cannot yet replace the driver’s judgment and experience. The person behind the wheel remains responsible for how the vehicle is driven.

However, if a driver does not have control of the situation, for example in case of sudden illness or fatigue, the AEB system may mean that a collision is avoided or the consequences of an accident are less severe.

With certain exceptions, AEB can be ordered on all two- or three-axle Scania trucks with. The system does not require other options to be included in the vehicle’s equipment. But as components in the system are also used by other driver support systems – such as Adaptive Cruise Control (ACC) and Lane Departure Warning (LDW) – it is more cost-effective from a customer perspective to equip trucks with all of these driver assistance systems.