From humble beginnings, the Gläser haulage firm has experienced constant growth since the reunification of Germany and now has 80 employees. This family business was the first Scania customer in Germany to purchase a Euro 6-compliant vehicle. 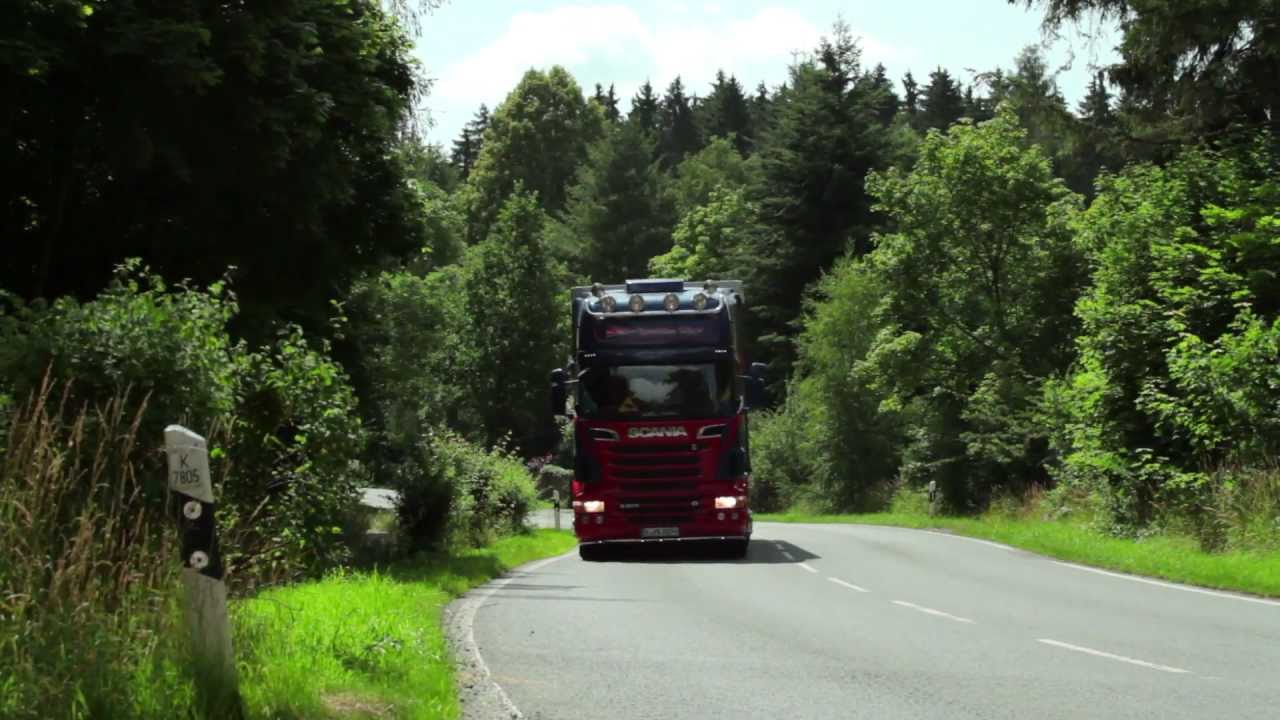 This family business, which has its registered office in Neuensalz near Plauen, in the state of Saxony, Germany, transports steel and machinery, chilled meat and sausage products as well as beverages for well-known customers. The haulier operates throughout Germany and Scandinavia.

The current fleet of trucks is 50-strong, two thirds of which are Scania vehicles. The Managing Director firmly believes that a fleet must have the latest vehicles. Gläser considers that the Scania brand’s plus points are longevity, economical fuel consumption, driver satisfaction and good service. Scania cabs are fully equipped and all of the vehicles share a uniform design.

“The eye-catching design of the vehicles often appeals to our drivers”, says Gläser. When Scania first marketed its Euro 6 trucks, the company boss was the first customer in Germany to purchase an R 480, which meets the latest emission standard. The environmental statistics played a large part in that decision. “The vehicle is both economical and meets the highest environmental standards”, the 49-year-old emphasises. He was also impressed by the fact that the R 480 was named ‘Green Truck 2012’ by the German transport trade press.

Managing Director Veit Gläser took over the reins of the company in 2003 from his father Gottfried Gläser.

The haulage company has 80 employees, including 75 drivers and four trainee drivers. Many of them have been working at Gläser for over ten years.

“We’re like one big family, so there is very little staff turnover,” says the MD. “It’s a very friendly, positive working environment. We shed blood, sweat and tears for the company, even working seven days a week if we have to,” says fleet manager and trainer Marcel Eichler, who has been at the company for six years.

He was a truck driver for many years before he joined the company. The company organises a huge annual party for all of its employees where spouses and partners are also welcome. Kristin Hüter, the daughter of Veit Gläser, is the fourth generation of the Gläser family to work at the company.

The 27-year-old business administration graduate is responsible for finance and accounting, but will soon be cutting down her hours as she is expecting a baby, who in turn will be the fifth generation. The Gläser family business wouldn’t be complete without Carlos, a playful Labrador puppy, who is always getting involved.

Horst Gläser was the first in his family to recognise the opportunities in the transport industry. He founded the company in 1936 in Schönau near Zwickau, in the state of Saxony in eastern Germany.

In 1950, Gläser began transporting milk for the regional dairy co-operative from the surrounding villages to Zwickau. The founder died in 1961 and his son, Gottfried Gläser, took over the reins with two IFA W50 trucks. The co-operative filed for insolvency after the reunification of Germany, but the haulage firm went in search of new customers from the West. Gläser bought two Scania trucks for the first time in 1991.

Since then, the company has stayed loyal to the brand. In the years to follow, the company experienced constant growth. Its premises grew and it acquired its own service station, a truck washing station with its own water supply and environmentally adapted oil separators as well as truck parking spaces.

In 2003, Gottfried Gläser handed over management of the company and 20 vehicles to his son Veit Gläser, who had already been working at the company since 1984. The trained auto service technician also established his own workshop in 2005, Nutzfahrzeugservice Plauen GmbH, which has twelve employees and two trainees.

The workshop serves as a Scania Gera service partner for the Vogtland area. It offers maintenance, repairs, reconditioning and many other types of workshop services for both domestic and foreign Scania and DAF trucks. The haulier and the workshop are both well located in the industrial park in Neuensalz, directly on the A 72 route. In 2009, the haulage firm began work on setting up its own scheduling system.

You can still find the warehouses, service station and tyre service in Schönau, where the company was originally founded. Gottfried Gläser is in charge of the tyre business. Andreas Leistner has been the Scania contact person for Gläser firm since 1992. “Working with Scania has always been a pleasure,” says Veit Gläser.

Three years ago, the Managing Director bought a vintage truck, a Scania-Vabis L76, built in 1963. When he gets time, he is going to lovingly restore it to its former glory. So, as you can see, he can’t get enough of Scania even when he is not at work.