On Saturday 25 May 2019, Europe’s best driver was crowned in Scania Driver Competitions. The winner of the grand prize, 100,000 euros to spend on a new truck, was Andreas Nordsjø from Norway. 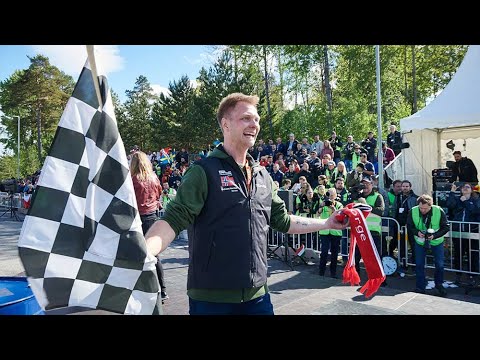 Click on the video above to watch an interview with the winner Andreas Nordsjø.

The competition started as a response to a 2003 European Commission directive on driver training, which aimed to minimise the environmental impact of truck driving by increasing road-safety awareness and improving fuel consumption. Since then, more than 350,000 truck drivers in nearly 50 countries have participated in Scania Driver Competitions.

In addition to the challenges of driving, professional drivers encounter numerous incidental challenges every day. The winner of Scania Driver Competitions needs to manage a lot more than just driving a truck from point A to point B, something that comes to show in the various exercises. While the contestants were keeping focus during the qualification round on Friday, managing exercises such as fuel economy driving, defensive driving, check before driving, cargo securing, first aid and knock the king, the anticipation for the final round on Saturday was high.

Fredrik Arwidmark from Sweden at the final challenge, “Extreme knock the king”.Dan Boman 2019

Even more so, since the competition management had challenged the drivers even further by adding a couple of new qualification exercises. The bird view precise driving where the contestants had to test distribution-driving in a roundabout all the while being blindfolded. Well, almost as the only way to navigate was by using the truck’s 360-degree camera system since the windows were all blackened out. With the XT different roads exercise, the contestants were faced with off-road driving in a difficult way, causing many stops while paying attention to other obstacles.

Only 18 out of the 30 were left for the final round, starting with a twisted water challenge. Competing head to head while manoeuvring with precision and trying to keep as much water as possible in the water tank. This exercise eliminated another nine drivers. Super Y was up next. Here, they competed three-on-three, positioning their vehicles with precision. The three remaining drivers then met each other in extreme knock the king – the great super final where keeping cool while managing several tasks is rewarded. It turned out Andreas Nordsjø had the strongest nerves.

Andreas Nordsjø is now one of few drivers that can call himself the best truck driver in Europe. Scania thinks he and his fellow drivers are the most important factor in overcoming the number of challenges the transport industry is facing today regarding road safety, fuel efficiency and reducing the transport industry’s environmental footprint. Another goal for Scania Driver Competitions is to draw more people into a profession that has become more demanding and versatile.

Andreas Nordsjø from Norway won the #ScaniaDriverCompetitions final, congrats! He receives a cheque for EUR 100,000: money to spend on a Scania truck specified to meet the user’s needs. #scania #truckdriver