Nearly 115 years after its first race, a rare Vabis 1903 entered and completed the 100-kilometre 2018 Bonhams Veteran Car Run from London to Brighton.

When the cars lined up at the start of the route in Hyde Park, London at 6:59 am on that November morning it was a milestone, and a dream come true, for a group of car restoring enthusiasts who had set the goal to get the Vabis 1903 race ready. A few hours later at 4:30 pm, the Vabis 1903 arrived in Brighton as one of 431 vehicles to complete the race. Another feather in the cap for the car restorers; the car had been in a museum since the 1940’s, before the idea of entering the race came up.

Many years of restoration work

Since 2015, Aros Motorveteraner, a group of car restoring enthusiasts based in Västerås, Sweden, has worked hard to restore the Vabis 1903 in hopes of being able to one day enter the vehicle in the London to Brighton Veteran Car Run. The hunt for spare parts demanded thorough research, as the vehicle was manufactured in 1903 by the Vabis company.

Founded in the Swedish industrial city of Södertälje and owned by Surahammars Bruk AB, the Vabis company branched out into other emerging industries including trucks, marine engines and cars, before merging with Maskinfabriksaktiebolaget Scania in 1911 to form Scania-Vabis, later known as Scania. The Vabis name is derived from the abbreviation of Vagnfabriks Aktiebolaget i Södertelge (Wagon Factory Limited Company of Södertälje ) which was established in 1891, originally to build railway carriages.

Designed by Gustaf Erikson, father of the Swedish automobile industry

As well as a pivotal building block in Scania’s history, the Vabis 1903 that completed the Bonhams Veteran Car Run is the fourth vehicle ever made – and currently the earliest working vehicle designed by Gustaf Erikson; who is widely regarded as the father of the Swedish automobile industry. The three earlier Vabis autos have had a different fate altogether; two of them were burnt in a fire, and the third is owned by the Swedish National Museum of Science and Technology. However, that particular vehicle is not fit to drive.

Vabis 1903 was first seen in Paris at the Exposition Internationale de l’Automobile, du Cycle et de Sport, the same year it was built. At that time, it was used mainly for representation before it was taken out of service ten years later. Even the Swedish Crown Prince, who later became King Gustav V, was photographed in the vehicle, giving it a regal air.

It took nearly four years for the car restoration enthusiasts from the Aros Motorveteraner to get the Vabis 1903 on the road again. Their aim was always to bring the vehicle to London to Brighton Veteran Car Run. Bo Söderberg, one of the Aros members, said: “It is an extremely prestigious event and I’m very proud that we have worked hard to make the car functional.” Söderberg says he is especially thankful for the support received from Surahammars Bruk, Scania, the Swedish Embassy and the community, that helped them make this a reality.

Before the event, the Vabis 1903 was displayed at the Regent Street Motor Show, England’s biggest free-to-view motor show. The Vabis was awarded the Judges’ Overseas Award at the Concours d’Elegance awards ceremony, even though the organisers hadn’t heard about Vabis before the entry form was filled out.

The team also collected the Harrods Heritage Award at the same event in recognition of the best restoration or heritage project. “It is hard to believe that the car received as much attention as it did at the event. We are extremely proud to be associated with it and happy to have won the restoration award too after seeing hundreds of perfectly restored cars in the run,” Söderberg continues.

The appearance in the London to Brighton run wasn’t the first time the Vabis 1903 finished a race. Back in 1904, it entered Sweden’s very first automobile race. Unfortunately, the car jumped vigorously when passing a bridge, making the torsion spring hooked around the cardan shaft break. The car then had to be towed to Södertälje. The Vabis 1903 is the only one remaining from the 1904 event, making it the oldest race car in Sweden. 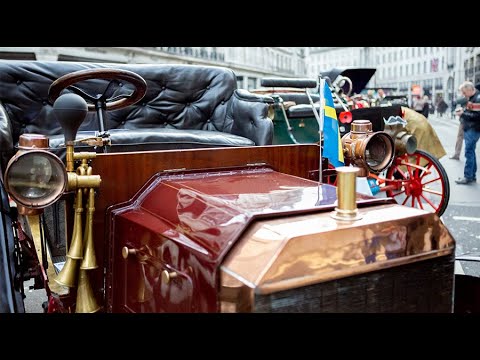